UT
Scenic Route Series
Article by Alexander Moliski
January 15, 2019
You don't necessarily have to leave your car to see the world. Route 12 in Utah is perhaps the best evidence for this claim.

"Is it possible to immerse yourself in nature with a piece of glass between you and the grass?"

It is difficult to describe how traveling inside a car is in anyway comparable to hiking on foot. I originally thought such a comparison was impossible; one is swift and comfortable, but limiting, while the other is slow, laborious, and limitless. I figured that the only way to fully connect and appreciate nature was to entirely immerse yourself in it. I was, of course, wrong. It is possible to enjoy the beauty of nature through the window of a car.

I once took a journey through Utah that ended up being more introspective that I had anticipated. What started as a familiar exercise turned into an eye opening experience when we decided to say ‘yes’ to a slightly longer route. Here I will recount the adventure with finer attention to travel details. Take a ride down scenic highway 12.

In a world where the value of time is ever increasing, where you aren't living if you aren’t moving, where the definition of fast food has changed from three minutes to thirty seconds, it is thought unproductive, or backwards to ever put the brakes on. Even when traveling, we are always looking for the fastest route from point A to point B. If you start in Houston, for example, and you want to see the Grand Tetons, no one will mind. If tell them that you plan on driving thirty hours instead of flying right into Jackson, people will call you crazy. I found that modern technology and advancements in transportation aren’t leaving the parks behind, they are simply missing everything in between.

That is why I drive. So much of the country reveals itself to you when driving, you get a sense of size, a peek at passing cultures, and a feel for local character. Route 12 is a prime example of a trail less traveled - and it's not even a trail! A busy airport and hustling interstate get you to your destination a little faster, it's true, but Route 12 takes you on a journey through some of the most scenic and colorful sights in the Western United States.

Driving evokes the true sense of American freedom and spirit. It is so easy to take a train and have it conveniently drop you off at a number of sight specific destinations, but when you are driving, the only limit is time. You can find yourself having adventures in towns that don't even make it on maps! The United States boast having the largest road network in the world with over 6.7 million kilometers. That is more than all of the roads in France, Spain, Germany, Italy, The U.K, Canada, Russia, and Australia combined (6,527,186 km)! That is an incredible amount of pavement to explore, and it is all in one country. When you are on the road for extended lengths of time, the true size of the country reveals itself, and you will be shocked by just how long it takes you to drive through some states - looking at you, Texas. These long drives will give you a new appreciation for those who had to cross the distance on covered wagon, or even on foot. And yes, the drives will be long, but it will not take you the 6 months to go 2,000 miles like it took our great-great-grandparents - you can do that trip in a single, comfortable week.

Naturally, following tradition for most of our trips in Utah, we started in the legendary town of Moab. After a quick visit to Arches, we gathered to discuss our plan for the next week. Escalante was on our list, but so was Vegas. We punch in the coordinates and without asking Google, found us the fastest route possible to our desired destination. We were looking at a seven hour drive across the state. Now, this wasn't our first rodeo, we had crossed Utah the year before on our inaugural trip through the country and this was the same suggested route. Someone spoke up and said, "We've already been down that road, is there another way?" 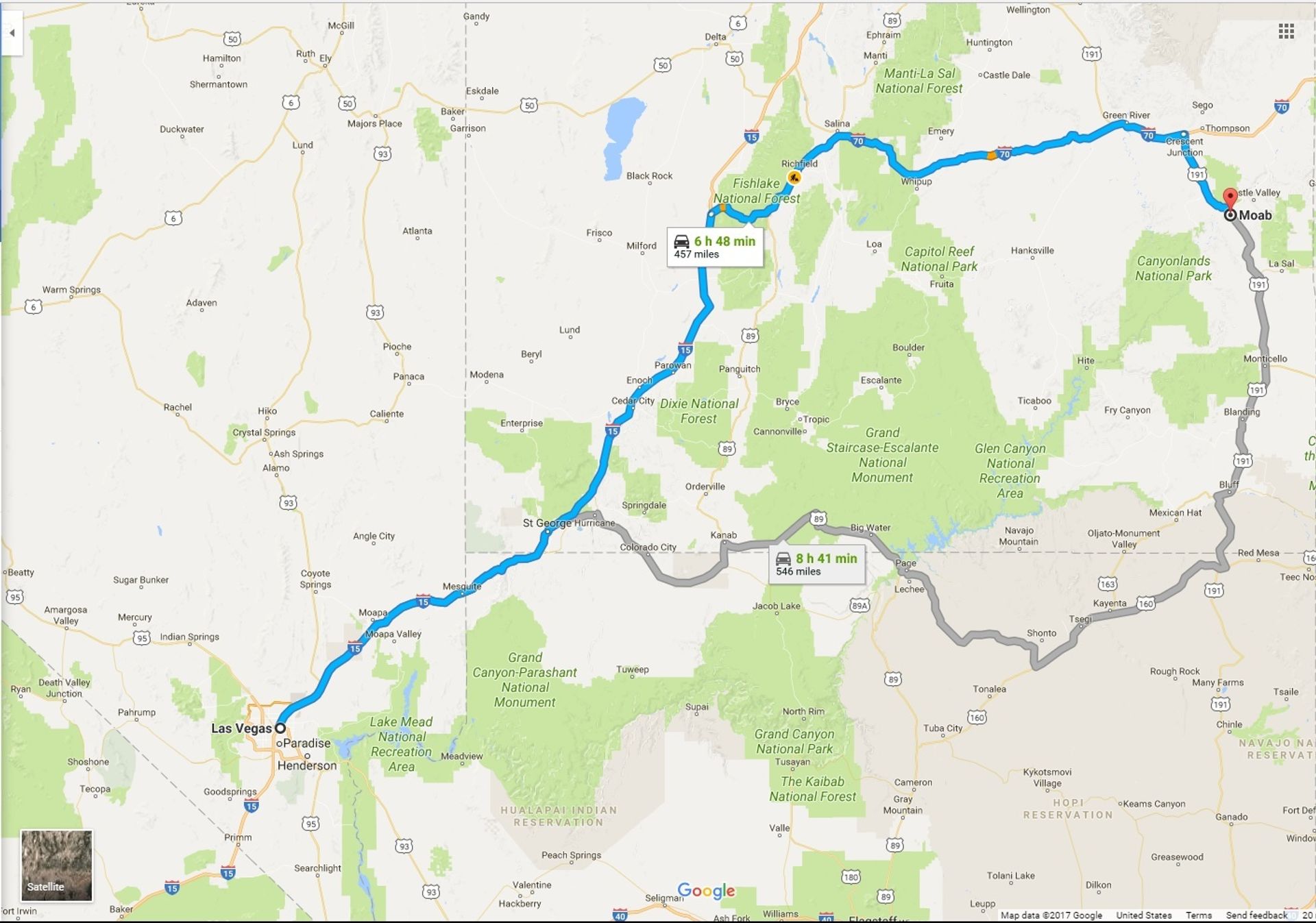 Upon taking a longer look at the route, we were amazed to discover that the road would take us through five parks (Goblin Valley State Park, Capitol Reef National Park, Grand Staircase-Escalante National Monument, Bryce Canyon National Park, Dixie National Forest, and close to Zion National Park)! We didn’t have time to stop at every park, so we relied on the seeing as many wonders as could from the car, and we weren’t left disappointed. I cover in Willingness to Wander much of this adventure, however, I wanted to show some of the highlights.

You can’t beat cruising along the Colorado River in the canyons around Moab. This stretch of road features campsites along the river. All of the sites are first come first serve, and even after reserving areas we found people tend take them over if you are not physically there protecting your area. None of the sites are farther than a few hundred feet from the road and river. Be respectful and share the sites if you can!

Hardly out of the way from the town is arguably the strangest national parks in the world. Arches National Park is one of the few places on earth that makes you feel like you are on a different planet. The park's accessibility, however, is what makes it a wonderful park for those who want to stay in their car. Naturally, I would advise getting out and exploring, but if that isn’t an option, Arches is extremely visible from its well maintained roads.

The road into the park splits the world. On one side, you can see miles into the red desert of Utah's strange countryside. On the opposite side of the road, you are escorted by towering mesas. Arches holds a special place in my heart being both my first national park I have ever visited, and the first national park I visited a second time.

After a few exciting days in the park, it was time to get back on the pavement. We followed Interstate 70 through Utah for some time before heading south on route 24.

Mt. Pennell was in view the entire way from Route 24 off of I70. No matter where you are in Utah the views are always rewarding. There is always something waiting for you around the next bend. We had just passed Goblin Valley state park, and although we didn't have time to stop in the park, the view from the road gave us a glimpse of what we missed. Natural rock statues littered the dusty desert hills for dozens of miles. Eventually, the sands started turning green, and we found ourselves surrounded by flat plains.

Route 12 and Utah will surprise you the entire way. As soon as think you have caught onto the the pattern of the landscape, it will change on you. Nothing but desert one moment, and mountains in the next. It is like Utah was a testing site for the rest of God's creations.

After getting to the little town of Escalante, Utah, we took a minor (week-long) detour, and ended up exploring quite a lot of Escalante, Grand Staircase - Escalante National Monument. Right from the road I snapped one of my all-time favorite shots.

Once getting back on route and driving right through multiple different parks, we exited scenic Route 12, and unanimously thought that our wonderful ride was over. We agreed to cut through one last part to get back onto the major highway. Now, I have seen a lot of this county out of the window of my car, but this was the first time I thought that you can really immerse yourself in nature through the window of your vehicle. We climbed up the side of a mountain in Dixie National Forest (remember, we weren’t expecting anything) and out of the front window of our car, right from the road we saw this:

Dixie National Forest caught be completely flat footed. I had let my guard down, and once again, Utah impressed me. We sat along the road and watched the view for a long while. We were in no rush, and our agenda had time for some sightseeing.

A little further ahead we found a proper pull-off. We shared the road, the park, and the scene with no one. It was all to ourselves. There was so much vibrance and color in the scene I nearly didn’t believe it was real. I had hiked for dozens of miles for views half as nice as this one.

Since this moment. I made a point to travel out of the way on the road as well as the trails. What is the point of summiting a mountain if you skip most of the journey in between. You never know what is going to impress you and where exactly it will be hiding. Some of my absolute favorite moments and scenes have been viewed from outside a window. If hiking is exploration of a single area on a micro level, than driving is exploration on a macro level, it is a holistic approach to exploring in the modern era. And sometimes, nature will find you right on the road!

Remote, rugged, and brilliant at night - Utah's West desert is both under-visited and underappreciated.